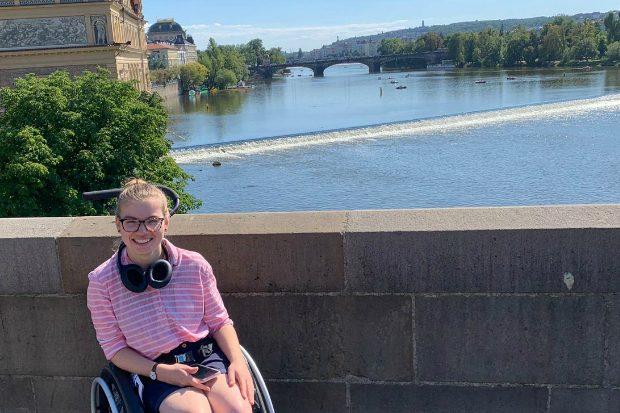 You’d be forgiven for thinking that a fast-paced graduate scheme wasn’t the most likely place to find someone who struggles to read, write and stand. When I joined the Fast Stream just over a year ago, I thought the same thing. I couldn’t help wondering, sat in a wheelchair at induction camp with a writer and a carer; was I just ticking a disability box?

A year on, and granted, my first year was hard and at times I wondered whether it was really the right place for me, but I’m a completely different person than I was. My first year on the Fast Stream has changed me from being defined by my disability to someone who just happens to be disabled.

Growing up when I told people I wanted a career, I was met with a range of neutral to negative reactions. I was destined to be defined by my disability entirely - even my GCSE Careers Advisor once said to my face, “People like you don’t do that.” It has been incredibly difficult to dispute her argument.  The only example of a wheelchair using person with a ‘normal’ job I found was Stephen Hawking – who’s not a realistic role model as a) I’m not a genius and b) Physics has never been my strong suit!

The Civil Service is, however, a very different place. I nervously rolled up on week one to find that there was already a guy in my team with cerebral palsy, another team was being led by a wheelchair-user, two Directors in the group were deaf and our Director General had a sight impairment. I had never had as many role models (and those were only a few examples).

The attitude of the able bods is different too, largely people are more accepting and just don’t care if you have a disability. That sounds bad, but what I mean is that professionally people simply care about you being able to do the job, the disability just gets accommodated by reasonable adjustments. I have worked with some amazing colleagues and Minsters who all seem to take the occasional spasm and relatively inaccessible venue in their strides.

It’s this environment and attitude that keeps me going back each day and kept me from quitting when I had literally no idea what adaptions I needed to do my job.  This has also helped me realise that I am quite capable. Success isn’t always defined by achieving the highest box marking, or in like for like comparison against my able-bodied counterparts, sometimes it is about celebrating the little things I can do now that I couldn’t a few months back, and knowing that I’ve added appreciated value with the work that I’m doing.

That said, though, as hard as they try nothing’s going to be perfect 100% of the time. There will be days where you have to go several floors down to find a working disabled toilet.  It can be a struggle to find a breakout space for a meeting that works for two wheelchairs.  The important thing is the way you and the people around you respond to these things. I have begun to embrace the little dance I have to do each morning so the airlock security pods will recognise me as human as a little bit of fun to brighten up my day and I know that I can cope with any access hiccups as long as I have colleagues around who will make me laugh about it.

All in all, despite first appearances, I’m extremely glad I joined the Fast Stream. It’s made me the kind of person that does normal, crazy things, like interrailing around Europe and solo journeys to Scotland on night buses, because I now have the confidence to know I can, which is better than doing something simply because I stubbornly want to do what someone tells me I can’t. I no longer ask myself “Can I do this with a disability?” Instead my thinking is “Do I want to do this?” and if the answer is “yes”, I’ll figure out how.

It’s so much more than a job. It’s not just taught me management skills for the workplace, it’s given me leadership skills for life.